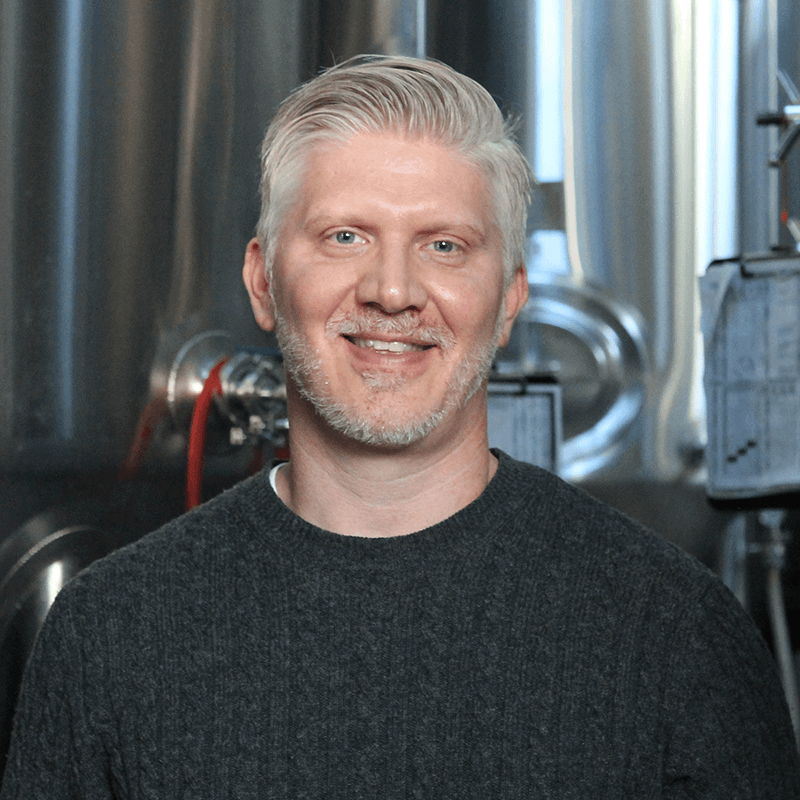 Welcome to the third in our monthly blog series introducing our founders. For this month’s blog, we’ll be interviewing our Sales Manager, Brian Thiel.

Where were you born?

I was born and grew up in a rural area of Northwest Ohio. You know you grew up in the “sticks” when your graduating class has only 21 students. Work took me out of Ohio and moved me to Colorado. I spent nearly four great years in Colorado before moving on to the state of Washington. Although I still respond to Ohio as my true “home”, Washington has been a wonderful home for my wife (Amber) and I for the past ten years.

What was the inspiration for opening a brewery?

For as long as I can remember, beer has always been part of my life. Early childhood memories lead me back to frequent visits with my younger brother and grandmother to the beer “carry-out” store where my aunt worked. Outside of operating a vehicle, I can’t remember too many times that my grandmother’s fingers weren’t wrapped around a can of beer. Speaking of which, I like to joke that my grandmother’s favorite beer was whatever was the cheapest or on sale. Remember generic/no-name beer?

It was the same grandmother whom I give credit to for introducing me to the joys of collecting beer cans as a young boy. Ditches, trash piles and garage sales yielded the best treasures to my growing collection. It was only after starting my employment with a global can manufacturer, where literally billions of cans are produced annually, that the thrill of collecting beer cans wore out. Today, my collection resides within boxes, gathering dust in an attic much to the chagrin of my wife.

One day, not long ago, I was reflecting upon all the time that I’ve spent with craft breweries as well as all of the projects I’ve worked on with macro-breweries and it sort of hit me like a ton of bricks. I realized that day how much I enjoyed the spirit that exists within the beer industry and how much I wanted to be part of it.

“Why not?” is what I asked myself after discovering the number of gluten-free beer offerings was rather pitiful. My wife, Amber, was diagnosed with Celiac Disease in 2010. For someone who enjoys beer as much as she does, finding out she was Celiac equated to a life sentence without beer. After sampling nearly every gluten-free beer on the market, it became painfully evident that gluten-free consumers were forced to abandon beer altogether or settle for something far from what they really wanted. I simply decided that I wanted to be part of the solution…..good craft beer that happens to be gluten-free!

Do you remember your first beer?

I am not sure if I remember my very first beer, but embarrassingly I can reflect back upon what can best be described as “training wheels” for beer. A hybrid alcoholic beverage known as “White Mountain Coolers”. I have no idea how this stuff made it to market, but it was the rave during my high school days. Let’s just say that some things, like peanut butter and jelly are best enjoyed together, but a beer/wine cooler combination is a completely different story!

What type of beer would we find in your refrigerator today?

I truly believe we are living in one of the best eras in history with all of the choices of beer styles and varieties of beer brands in the market. As much as I like to try different beer styles, I seem to always gravitate back to a nice, hoppy IPA. Living in the Pacific Northwest is like being in IPA nirvana! Truth be told, you would still find room in my fridge for a few different Belgian style ales.

What is the most important attribute you look for in others?

Wow, what a deep question! I feel like I am most drawn to the integrity of others. Integrity can mean so many different things to people. For me it is the most important attribute in a person because it is created by such things as trust, consistency and character. How people handle themselves in different environments and situations can really tell a lot about someone’s integrity. I’ve always been drawn to people who handle themselves with a high degree of integrity while still being able to poke fun at themselves.

Tell us something we probably wouldn’t guess about you?

“You wanted the best, you got the best!” I caught my first glimpse of the band KISS when I was 7 years old sitting next to an older student who was showing off his KISS tour book to his friends at the back of the school bus. I must admit that Gene Simmons scared the begeezus out of me in the beginning, but there was something about the mystery, spirit and music of this band that endured me to them. Nearly 40 years later, I still take great pride in being a part of the KISS Army!

If you were a cereal, what would you be?

Cap’n Crunch, of course. Is there really anything else?

All joking aside, Randy, Igliashon and I are super excited to bring a completely new and refreshing brand of gluten-free beer to the craft market. We look forward to getting to know you over a few pints of Ghostfish beer inside our taproom or wherever we have the opportunity to enjoy Ghostfish beer with you!